HOW BLUE IS BLUE GROUND?

"How blue is blue ground?" This is in reference to the altered clay- and carbonate-rich soils sitting over weathered diamondiferous kimberlite initially described as yellow ground and blue ground by the South African diamond prospectors in the 19th century.

After alluvial diamonds were discovered in South Africa in the 1860s, prospectors searched for the source of these gems. Rich diamond placers were found along the Orange River in 1870 and these gems were traced to what early prospectors thought were dry placers. The ‘dry placers’ were small and filled with all different kinds of rocks that were mostly rounded boulders and cobbles, as if they had been stream polished and deposited by a creek or river.

It wasn’t until shafts were sunk into these so-called alluvial deposits that the prospectors hit clay beneath the so-called ‘dry placers’. This clay zone was mistakenly thought to be the bottom of the diamond placers. As a result, some prospectors quickly sold interest in their claims.

In reality, the miners had dug into weathered kimberlite. As they dug into the clays beneath the dry placers, they discovered that the blue clays contained diamond. When they dug deeper, they intersected a hard rock that also contained diamonds that was christened ‘kimberlite’.

Kimberlite is formed primarily of the mineral  olivine. When olivine alters at high temperature and pressure in the presence of water vapor, it produces green serpentine. All kimberlites are essentially serpentine breccias or serpentine porphyries. As the kimberlite sits on the surface of the earth for some time, the serpentine will breaks down into a blue clay and carbonate. The clay is montmorillonite and looks light-gray blue, and when wet, it looks blue. Carbonate is so abundant, that the rock, clay and just about anything to do with the kimberlite will yield carbon-dioxide when dilute hydrochloric acid is placed on then. When wet, the clay looks blue – hence the name, ‘blue ground’.

Kimberlite initially erupts as magma in rare volcanic pipes. The magma drills its way through the earth’s upper mantle and crust starting at depths as great as 120 miles. As the magma gets close to the earth’s surface, it is under great pressure and erupts with tremendous force and acceleration. Imagine that bottle of diet coke and mentos. When it erupts, it probably looks similar to a kimberlite eruption.

As kimberlite arrives at the earth’s surface, the magma is rich in carbon dioxide under pressure. The CO2 is released just like in the diet coke and momentos experiment, and the gaseous emplacement of the magma is so energetic, that it erupts at 3 times the speed of sound with emplacement temperatures of only 32oF!

Why so cold? It is because of expanding CO2 gas that adiabatically cools. So now you know of one volcano where you can actually get frost bite if you happened to be nearby. But, you don’t want to be nearby as rocks and boulders are flung out like a shotgun blast erupting from the earth.

The kimberlite volcano is basically a carrot-shape pipe that tapers down to a dike at depth. Rocks trapped in the magma are polished as they are brought up from depth. This polishing effect results in rounded boulders that appear as a dry placer at the surface. The volcano also does not produce a cone (like most volcanoes) and instead produces a depression known as maar volcano, which often is later filled with a shallow, circular pond. More than 300 of these ponds and depressions containing carbonate rich soil and rounded boulders were found by the GemHunter prior to 2008. To date, only one was ever drilled, so, there are likely dozens, if not hundreds of unexplored diamond pipes in Colorado and Wyoming.

So when prospectors search for kimberlite, they look for depressions that give an impression of a impact crater. In fact, one kimberlite in northeastern Kansas was for many years known as the Winkler crater as it was thought to have been the site of an impact. We now know this structure to be kimberlite due to work by the late Dr. Doug Brookins.

Many of these maar volcanoes remain distinct depressions throughout much of geological time as a result of the host rock (kimberlite) being softer and more easily eroded than the surrounding country rock. Serpentine is soft, as a result, the kimberlite erodes more rapidly. The chemistry of the serpentine and resulting montmorillonite clays also support different kinds of vegetation than surrounding granites, gneisses and schists.

Some of the first blue ground that I (the GemHunter) came across in 1977 was exposed in badger diggings in kimberlites in the State Line district in Wyoming.  One of these I later called the Aultman 2 kimberlite and was the first kimberlite I had discovered in a district with several other kimberlites discovered by other geologists including David Eggler, M.E. McCallum, and Chuck Mabarak.

HOW BLUE IS BLUE GROUND?

Dry placer?’ at Cedar Mountain, Wyoming. These rounded boulders and cobbles are part of a lamprophyre breccia pipe that contains abundant... 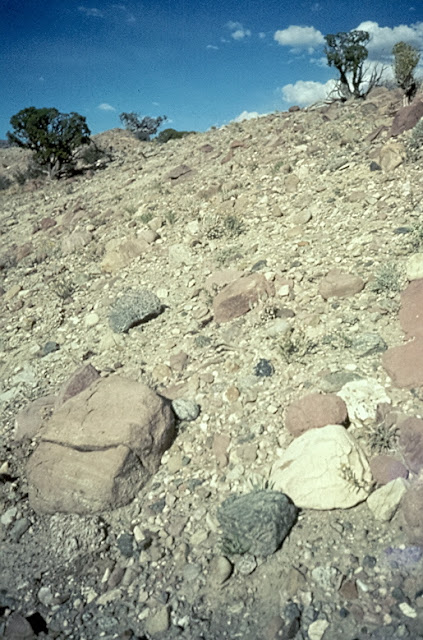 The Gem Hunter
The Gemhunter, a polymath of rocks, martial arts, stars, pencil, written word & public speaking. A Hall of Fame Martial Artist, Geologist, Author and Public Speaker. Look for numerous blogs by the GemHunter on gemstones, gold and martial arts designed to help the reader learn about these subjects.